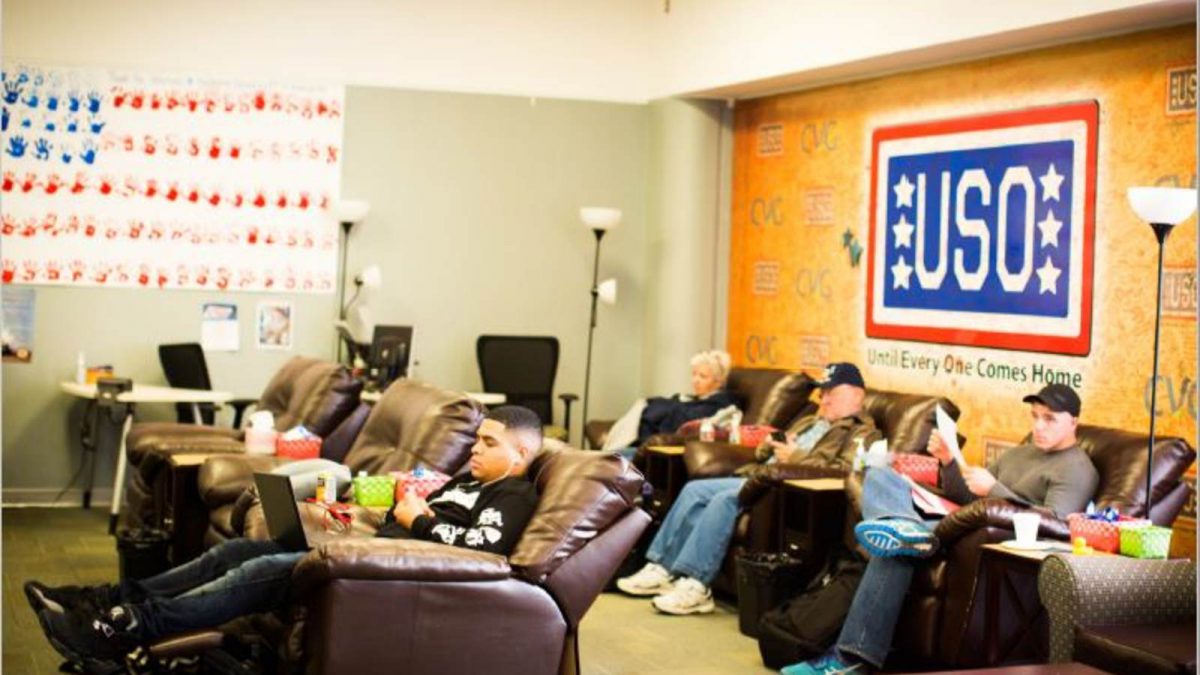 Military airport lounges have been a staple of official and leisure travel for servicemembers and their families for a very long time. Anyone who has ever had to make a permanent change of station move from a stateside to an overseas assignment has likely taken advantage of a military airport lounge, and those traveling with families to and from overseas locations find these lounges to be an oasis during the long trip.

Since World War Two, some of the most well-known military airport lounges have been operated by the USO. These lounges are open to currently serving military members and their families with unexpired ID cards and feature internet access, sleeping areas, small libraries, mini-theaters, snacks, and other services that vary depending on location. But these lounges aren’t open to all visitors.

The USO official site notes, “Occasionally, veterans or military retirees contact us to tell us they couldn’t get into a USO airport lounge because they didn’t have an active military ID card. As much as we’d like to open our doors to all those who have honorably served, we have limited space and resources.”

At the time of this writing, USO airport lounges are not open to retirees and veterans, preferring to use all available resources for those who are currently serving in uniform and their families.

USO lounges are normally listed in airport directory maps and official sites. The signage and visibility for these lounges is often minimal so it is always best to ask at an airport information desk if you are not sure if the USO is active at that airport and where the lounge might be. An unexpired military ID is always required for entry into the lounge just like entering a military installation.

You can find a USO lounge by searching the official site: the USO has operations in roughly 200 locations (not all are in airports) so chances are good that you may find USO facilities in an airport you are traveling to or from if you’re traveling to common destinations for official business or leisure trips.

Be Mindful of Peak Travel Times

USO lounges can fill up fast during PCS season, during deployments, and (depending on location) TDYs. For example, if you are traveling from Colorado at the end of the summer just before the start of fall semester classes at the Air Force Academy, the USO lounge at Denver International Airport might be busier than usual. Peak travel times vary depending on location, tourist season, and other factors.

USO Airport Lounges: Not All Destinations Are Equal

Some USO operations are quite small, others, like the one located at St. Louis Lambert International Airport, may have partnerships with major league sports teams; one story that’s made the rounds on certain travel blogs notes the individual who checked into the Lambert Airport USO only to find there were free major league baseball tickets to be had for those arriving in St. Louis.

Some locations may offer free food, coffee, books, and sleep pods, others may also be able to arrange shuttle services from the airport or help travelers find shuttles going their way.

The USO: Not The Only Lounge In The Airport

The USO operates military-specific lounges in major airports all over the world, but these are not the only airport lounges available, and many are open to military members even if those troops are not members of the clubs themselves.

Many airlines have frequent flyer or VIP clubs with lounge facilities that require membership to get in. These airlines often have policies for admitting non-members who serve in uniform and their families. They include, but are not limited to:

Who Can Use An Airline Club Airport Lounge?

Generally, the airport lounges run by American Airlines, Delta, etc. are members-only spaces and those memberships can cost roughly $500 a year. But the rules for these members-only lounges often include exceptions for military members and sometimes their families, too.

The key to getting access to these lounges is to remember that the staff isn’t used to people coming in without a membership, and even though there are special rules in place for qualifying military travelers, lounge staff isn’t always aware of them and may have to be shown-it’s very good to have a copy of the pertinent rules pulled up on your mobile device to show a staff member in case they are unaware.

It’s also good to do this in a nice and unobtrusive way.

General rules for lounge access where military fliers are concerned will vary depending on the lounge, and rules are always subject to change so it’s best to check with the airline prior to your travel day to make sure you are still entitled to use a members-only airport lounge according to the rules of the program.

Airport Lounges That Have Allowed Military Access Without A Membership

American Airlines operates the Admiral’s Club in select airports around the world, in both domestic and international lounges.

The American Airlines official site says military members and family traveling same-day on United are eligible to use these airport lounges with a boarding pass and a military ID. Military members must be in uniform to travel.

United Airlines has had a policy in the past that any active duty military member flying United same day may use United Clubs as long as you’re flying on orders AND are traveling in uniform. Some travel blogs report United Clubs staff being uninformed about this feature, needing to be shown the rules pertaining to military access as detailed on United.com.

But has this policy changed in recent days? Likely not, but it’s always better to check.

Delta Airlines operates Delta Sky Club lounges and have no specific policy listed on the Sky Club official site for military, but some travel blogs claim Delta may allow those traveling in uniform to and from deployments permission to use the lounge with a copy of orders and military ID.

Delta Sky Club membership options are open to those who apply for credit cards (see below), and military members traveling over the holidas may find Delta operating military lounge type operations during peak holiday travel season as a way of showing support for troops and military families.

Some Airlines Don’t Have A Lounge, But…

You may find certain airlines have partnered with other agencies allowing access to airport lounges as a perk of booking, of being a member of frequent flyer programs, etc. It’s always best to ask at the time you book your air travel about the availability of airport lounge perks and how to get them.